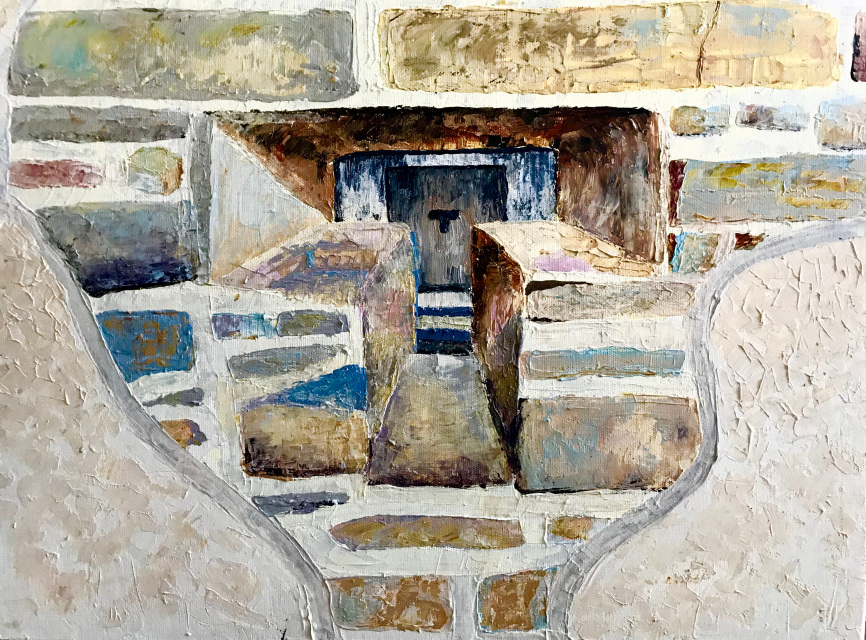 In 2015, I was called to the mysteries of the southern Mexican jungle. The Palenque ruins, one of the most mystical Mayan sites, date from 226 BC to AD 799. The entire city of Palenque was a place of antique pilgrimage and only five percent of it has been excavated.

Weaving through the stone structures, I came upon T-shaped holes in the thin walls made of the local soft limestone with lintels in wood. Unlike every other building in the palace complex, this House E was painted white with very unusual colorful depictions of stylized flowers and insects. Much of the nature-derived staining has faded, but slight remnants attach to the texture of certain rocks. This house has proximity to the steam baths, suggesting the south west court was used for vision rites and contacting ancestors. Ironically relating to the baths, this site of Palenque was also prehistorically known as Lakam Ha, meaning Big Water.

This T-shaped slit, in particular, was placed directly across from a wide doorway with the same T- symbol. Based on shapes found in nature, Maya geometry was considered sacred. What is behind the door? Are these T’s a security look-out from the inside, or peep holes to spy on the bath and sauna ceremonies? I learned that this T-shape is a representation of the 'Ik,' the god of the wind. These divine orifices allowed the wind to pass through, so Ik could feel honored and refrain from destroying the structure.