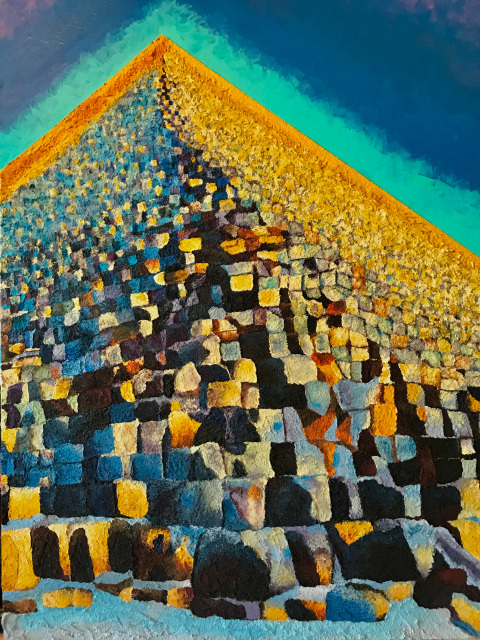 In April of 2017, I stopped into Giza to explore the Great Pyramids. Not only was I captivated by the enormity of the pyramid of Khufu, but also the unique shape and weathered form of each rock.

Feeling an intense energy of excitement, I later learned that significant sites like this one, and many other structural sites of the ancient world, are built on specific intersections of geologic lay-lines called tuleric lines of electromagnetic currents. In China, these are called dragon lines and the intersections were sacred spaces worthy of only royal burials or palaces.

Even though commonly thought to be made of simple stone from nearby quarries, the rocks were from a variety of areas and chosen for their specific qualities. The core of these pyramids are actually made of dolomite, including magnesium as an electricity conductor. Radioactive granite lines the sealed shafts that releases a lively radon gas. And, white limestone was used to cover the outer layer of the pyramids. Further, water from the Nile used to run through underground aquifers, a chalk foundation, creating a charge in magnetic field like modern-day hydro-electric damns.

Combined with solar power of the sun, these glowing pinnacles acted as illuminated spiritual storehouses, gigantic lightbulbs. Often called prana, chi, or life force energy, this feeling charge of peaceful bliss can also be found on mountain tops and other sacred sites around the world.