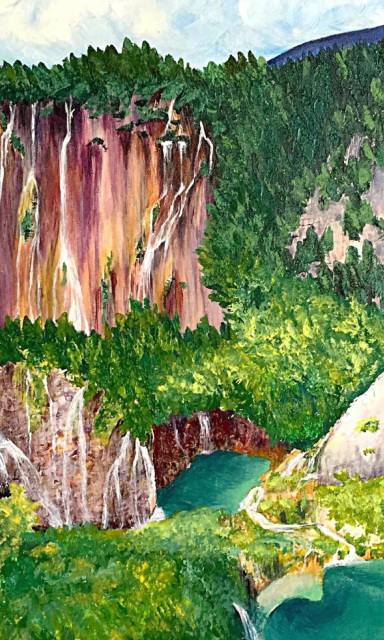 In July of 2015, I visited Plitvice Lakes in Croatia. This natural park is filled with turquoise waters and over a hundred waterfalls in the midst of lush forest and steep cliff drops. Waterfalls often relate to a great release of emotion, rejuvenation and renewal of spirit.

In Norway and Iceland, the word 'waterfall' translates as 'Foss' which in Latin is a derivative word element relating to 'light'.

The ancient Greek philosopher, Heraclitus, was inspired to reflect on the waterfall as the continuous evolution of beings. The drops of water which make up the waterfall are renewed each second, just like the view in Buddhism of the purely illusory components of manifestation.

In Classical Chinese painting the waterfall has frequently been an element, which in opposition to the rock, represents yin and yang and is considered the symbol of impermanence.

In Japan in the Shinto tradition, standing under waterfalls is believed to purify your spiritual energy.